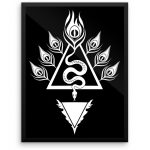 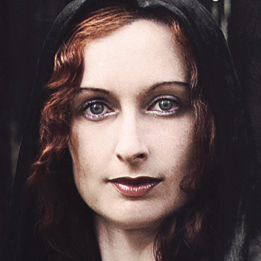 This sigil represents the Draconian symbolism of Melek Taus and the stellar aspects of his cult. The seven feathers with reptilian eyes represent both the peacock and the serpent – two animals symbolic of his current, and the flames stands for his Luciferian, solar nature. The triangles/pyramids represent the double aspect of his gnosis: that of light and darkness, the above and the below—two worlds united by the descent of gnosis. The descending serpent is the bringer of knowledge and enlightenment from the higher planes to the earth. The upper eye is on fire, showing that the Luciferian flame is the vehicle of ascent. The lower triangle stands for human consciousness, the vessel enflamed by the gnosis of the Serpent/Peacock.