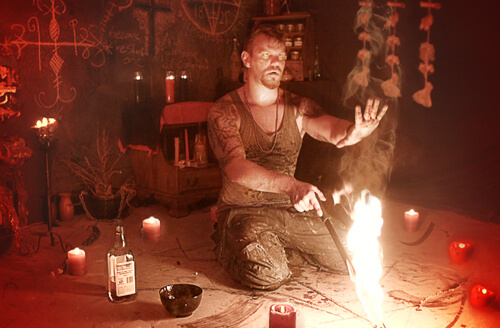 The houngans and mambos of the religion have done everything in their power to keep this information out of your hands.

In fact, in consultations I do with magicians who are are white, hispanic, Asian, or even Black American, they worry whether they can learn Vodoun without being from Haiti

The answer is that, yes, you can learn, practice, and even Master Haitian Vodoun, regardless of your race, gender, sexual orientation, or nationality!

How can I be so sure? Because I’ve done it myself, and I can show you how to as well

Eight years ago, Vodoun Houngan Baron DePrince counseled me through a strenuous pathworking of blind Initiations with the Loa, specifically so that I could write a grimoire that documents exact rites, possessions, and the magickal experiences of Haitian Vodoun, which has become known as “The Spider and the Green Butterfly.

DePrince would tell me to go into the desert with a bag of cornmeal, a bottle of rum, and a veve, and the next day I would report my exact experiences to him, so that he could judge that I had indeed made real contact with the Lwa.

What we were really doing was conducting a grand experiment to see whether a white, western magician could really be initiated by the Lwa themselves. The result was a full pathworking of Haitian Vodoun that anyone can enter into, regardless of race, age, gender, or geographic location.

But, the Haitian Houngans insisted on redacting information and placing blinds in the text to make it unusable to the uninitiated, and insisted that we limit it to 500 copies, which confused me, since DePrince told me that the Loa themselves wanted this book to be written, and that the Vodoun cult leaders back in Haiti had given it their blessing. It seems that the blessings of traditional houngans come with quite a few strings attached!

Haitian Houngans Threatened To Murder Me If I Reveal Their Secret

Ultimately, they threatened that if I ever revealed the full extent of what I had learned that they would literally murder me, either through curses or through religious terrorism.

Afraid for my life with a new wife and a baby at home, I promised to go along with their demands.

I realized through working with the Lwa over the last 8 years that they do not share the same violent racism and exclusion of their so-called priests, and they actually DO want you to call on them, to connect with them. I have also learned that it is the Lwa who initiate you into the current, not some hate-filled priest hiding in a hut in haiti.

Because I am dedicated to the Lwa instead of to the priesthood of the religion I am breaking my oaths of secrecy.

I have combed through The Spider and the Green Butterfly and have removed all the blinds,corrected all of the mistakes, and have written in new material, and now I am delivering to you the REAL grimoire of Voodoo initiation!

On top of that, I’ve created a full video program, filming the most elaborate and revealing ritual pathworking of Haitian Vodoun in the history of humanity!

Sign up right now, because very soon we are going to release an exclusive interview with a Santeria initiate, and a free initiatory rite with the Lwa on film.