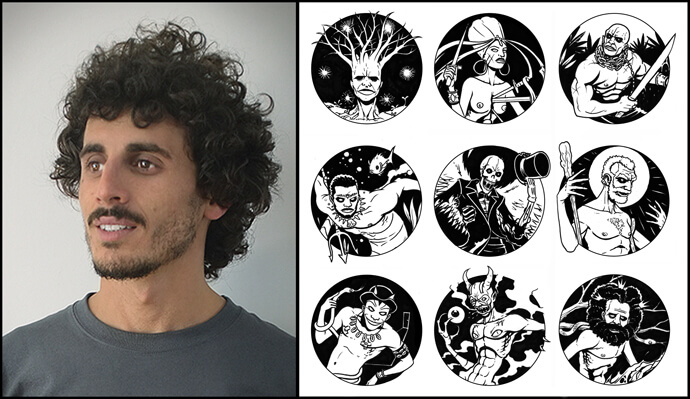 Our Favorite New Artist: Adrián Fuentes has become a culture icon in Uruguay and founded the renowned design boutique re-robot. Due to his love of Quimbanda, he insisted that he contribute artwork to our Vodoun grimoire—to which we happily agreed! His highly stylized illustrations invoke and enliven the personality of each Loa. Adrián also specializes in rock concert posters for bands like Queens of the Stone Age, Radio Moscow, and many more.

» Sign up for preorder of The Spider & The Green Butterfly grimoire right here.

My experiences with Vodoun Sorcery have shown me the radical differences in the nature of the Loa and traditional demons of Western black magick. Click here to watch my interview on this topic with Santeria initiate Brandon.

The spirits of the Goetia as well as most grimoire spirits are really easy to call and they do what you want generally. They all derive from the ancient Middle East, specifically from cultures very heavily influenced by Zoroastrianism and Judaism. In that part of the world and at the time that these spirits were not necessarily being formed, because I believe from what I’ve seen that many of them existed before we did, but as we put our own concepts on them and basically, as Michael Ford might say, we put our own masks on them, we’ve reimagined them much like ourselves.

In that time period and location, they enforced strict caste systems. The ordinary men, women, and children—99.9% of people—basically were treated like property as labor peasants. Everyone was fundamentally a slave unless they were in the priesthood, royalty, or warrior castes. These two institutions, the Church and State—the Empire as a whole, if you will—believed it possessed the religious right to rule humans.

You see these castes or classes in the main empires from Hindus in India to Shangdi-worshippers in China to Aztecs in Central America to Persians in the Middle East to Egyptians in Northern Africa to Romans in Europe. This template of built-in slavery then pervaded the subsequent Judaic-Christian-Islamic religious paradigm, which of course relates heavily to its predecessor Zoroastrianism of Persia. The spirits who appear in the Goetia naturally take orders from humans because they have roots in the slave religions of the Middle East, whereas the Loa do not. According to their creation myth, they were basically told, “You don’t have to obey rules except for these two: (1) keep the world intact, and (2) help humanity. Do those two things at any cost. They can destroy a person’s life so long as it helps that person ultimately. For this reason, magicians often have very fickle and unnerving experiences with the Loa, but it always turns out great eventually.

The Loa embody the essence of primitive, animalistic freedom!

The Loa embody the essence of primitive, animalistic freedom. When you participate in the rituals and especially when you undergo possession, all social conventions fall away. You reconnect with your animal side, and it throws open the doors of your psyche.

In our current, technological, microwave culture, we want to jump into the Goetia, flip the pages, and identify the spirit who does what we need. We call it and negotiate as equals. As sorcerers we’re kind of ordering off an astral menu like an economic trade. This is not a bad thing, I certainly love it at times, but that’s not the way things occurred in ancient times. They religiously worshiped the gods as their superiors. They prayed and sacrificed because they believed that if they failed to do so, the gods would punish them.

Your task now as a Vodoun sorcerer is to find that one spirit who acts as the key to unlock the magick for you—your Met Tet, or Orisha in Santeria. This refers to the Loa equal in power and greatness to all the other Loa who has one mission: to unite with you through possession and to complete you.

Work with all of the Loa, they’re all great teachers and they’ll all teach you completely different things, but one of the greatest goals you can have is that complete communion with your Met Tet, to find out, discover who it is. I’m probably going to get myself in trouble who make a lot of money at this, but you can’t pay somebody enough to tell you that kind of secret. It’s got to come from the spirit itself. It has to speak it to you. You have to know it and trust it when it’s spoken and go with it.

The Loa are really, you asked how they’re different, what are some of the differences between the Loa and maybe more Western spirits, and one is that the Loa don’t live in the astral plane separated from this plane. The only way I can put it is that I would have to say that they are physical beings that are just not manifest in physical form, but they live here on this earth with us.

The Loa are really, you asked how they’re different, what are some of the differences between the Loa and maybe more Western spirits, and one is that the Loa don’t live in the astral plane separated from this plane. The only way I can put it is that I would have to say that they are physical beings that are just not manifest in physical form, but they live here on this earth with us

For the last twenty years, I have remained dedicated to black magick. And for the last eight years, I have remained dedicated to Vodoun. In the meantime, I utilized my breadth of experience with sorcery to formulate an authentic grimoire of the Loa—I call it The Spider & The Green Butterfly. It furnishes you rites, spells, and spirits for you to harness Voodoo Magick in your own life.

When you enter the Vodoun Current, you quickly discover its secretive nature. Why will nobody openly discuss it so magicians can learn? Because the Houngans threaten death upon anyone who could potentially reveal any knowledge. But why? The priests have architected a pyramid scheme of religious initiation behind which they enslave the Loa. They have monopolized this species of spirit.

That all comes to a close on December 19th when I release The Spider & The Green Butterfly grimoire and its companion video course Vodoun Magick Mastery. Together we will liberate the Loa and form lifelong relationships that support human ascent. You may sign up for pre-order right now: