Last Chance: Book "The Dark Gift Ritual" With N.D. Blackwood - Get 69% Off 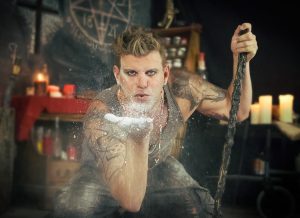 When DePrince first contacted me and offered to teach me Haitian Vodoun, he told me some of the things that could be possible with it.

A lot of these seemed like fairy tales, fantasies. They seemed too intense to really be true.

Some of the stories he told me were possible with this magick, I dismissed right away.

What I came to learn as I worked with these Loa and as they initiated me into their secrets is that he was only telling me the surface information.

The deeper I got into Haitian Vodoun, the more I saw that it was a fully transformative path

Honestly, I wasn’t really prepared for how powerful it is

I approached the entire system the way I would approach any system: taking my own western magick approach and inserting Vodoun into it.

I quickly realized that Vodoun is something entirely different from any other system I had learned.

It is a religion, a belief system, and a system of magick that is entirely unique.

In Ceremonial Magick, a good deal of the actions, the symbols, the circumambulations, and even the orations that the magician will give to call forth the spirit are given in an extremely controlled manner, especially when contrasted against the primitive, primal, and animalistic method of calling down the Loa.

In order to even work with this system, I had to learn how to give up control, how to let myself completely loose… and approach the Loa on their terms, rather than mine.

The Loa Are Physical Entities Bound To This World!

You see, the Loa are not astral beings that you can call and command, have them do things for you. They are actually physical entities that are bound to this earth and its elements

They are embodiments of natural forces.

Indeed, they can teach you how to harness these natural forces, and use them for your benefit.

Pathworking with the Loa is a gateway to ancient powers, and ancient forces.

The alchemical process that occurs with the Loa is like nothing else I’ve ever seen.

One of the most important things you’ll learn in Vodoun is possession.

You’ll learn how to give up yourself to the spirits. The secrets of possession are a key to lost power.

There is a true value in learning how to release yourself from yourself, learning how to get out of your own way and let the spirits come through, becoming the nexion between the worlds.

Sign up RIGHT NOW for the release of The Spider and the Green Butterfly and the Haitian Vodoun Pathworking Course at: