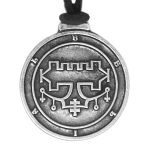 2. Ritual Evocation for Demonic Possession
Evoke and enter possession with your patron demon.

3. Spellcasting Talisman of Power
Fuel your spells for love, wealth, and protection.

4. Key to Astral Travel & Lucid Dreams
Unlock your access to the Infernal Empire.

Availability
Handcrafted in a strictly limited edition of only 40 amulets in this design.

Special Savings
Get $50 off to save 14% with the Consecration Kit.

The Amulet Of Belial
Add to Cart

I covenant to construct the Infernal Empire on earth, and to open nine permanent gateways on this earth, so that the ancient Gods, now called demons, may walk the earth. — The Nine Demonic Gatekeepers, p.256

Between 2018-2020, I embarked on an unprecedented three-year Ritual Evocation and Initiation Pathworking with the nine most powerful, most feared demons in human history. This supergroup of prehuman diplomats from Outer Darkness call themselves The Nine Demonic Gatekeepers.

Demon by demon, I entered perfect possession and respectfully unmasked these nine mysterious godlike demons to witness their true faces for the first time. These immortal, ascendant demons have incarnated under many names and masks in the most ancient civilizations over millennia. I recorded their true magick, priceless gnosis, and life-changing lessons in a 459-page, nine-grimoire compendium, called The Nine Demonic Gatekeepers.

Like a lifelong sinister shaman, my 25 years of black magick culminated in this 36-month journey into the Infernal Empire. The Nine Demonic Gatekeepers saga epitomizes my eternal ascent thus far.

As these Nine come together, as they seat themselves in this world, as we open the Gates and bring them through and as they unite in manifest forms, the God-Star will rise and the Prince of Darkness will draw near. — The Nine Demonic Gatekeepers, p.80

Like the legendary Knights of the Round Table, when The Nine Demonic Gatekeepers unite their magick collectively, they form a perfect synergy of unlimited demonic power, i.e., a meta-demon or super-demon, a new sovereign entity infinitely stronger and greater together than the sum of their individual parts alone.

Like a combination lock, The Nine Demonic Gatekeepers fit together, and interconnect with one another perfectly. They accelerate and maximize their ascent in unison, and thus transform into The Black Diamond. In other words, they “level up” into the supreme force of cosmic evolution that they call The God Star. In essence, The God Star embodies the sovereign manifestation of the Infernal Empire, or Infernal Crown, in beholdable, individuated, and unified form to the Black Magician.

Please allow me to introduce you to the Mighty Nine below one at a time according to their Demonic Name, Sigil, and Powers.

Do what thou wilt is no longer the law. There is no law. — The Nine Demonic Gatekeepers, p.70 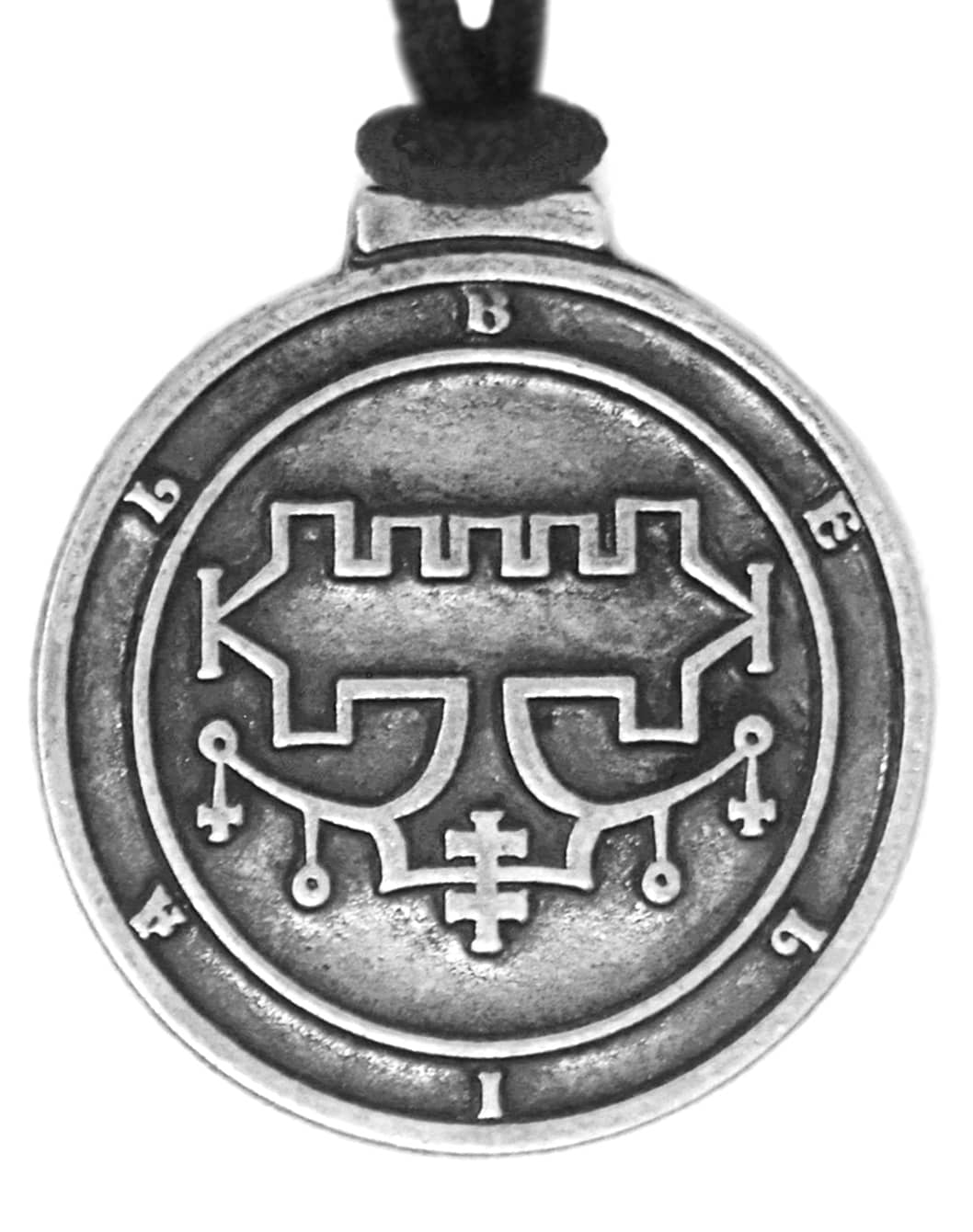 Belial is the Ruler of Hell, the King of this world, Angel of Lawlessness, and a Devil without a Master. In Christian and Judaic scripture, Belial is referred to as being the Worthless One, but the most ancient Canaanite sources place Belial as the springtime goddess descended to the underworld to sacrifice herself for her brother’s salvation. In a way, this makes Belial the proto-Christ, the Demonic Messiah. Belial doesn’t come to take your sins away, however, but instead your chains become revealed and you are given the power to break them.

Belial is the God of the Hopeless and the Forsaken. He has special abilities that allow him to infiltrate any power structure and exploit their weaknesses. He can use this to your advantage in ascending hierarchies and gaining influence, but his skills are much better put to use in turning these power structures against themselves. This can be applied to disrupting the power structures within families, communities, businesses, and even nations.

Belial disappeared from beneath the surface of the mirror, and his familiars appeared … to my scrying eyes as clearly as Belial had, their deeds and powers spoken by Belial’s now incorporeal voice … as they appeared in the mirror before me, their sigils also took shape in my grimoire, like lines of energy only slightly brighter than the paper pages, but shimmering as things from other worlds will. — The Nine Demonic Gatekeepers, p.37

The three most practical applications of Belial’s powers are:

Harness The Full Stack Of Magick Powers And Skyrocket Your Eternal Ascent With The Silver-Plated, Lunar-Powered Talisman

With the Amulet of Belial, you’re going to wield these key magick powers…

The Seven Simplest, Most Proven Techniques…

Here are the seven simplest, most proven techniques to harness the Amulet of Belial to empower both your ritual magick and everyday life…

In general, these guidelines simply summarize the endless and infinite possibilities that can arise with a magick connection to your patron demon from The Nine Demonic Gatekeepers — who will will elevate and accelerate your human evolution further than any other spirit, guide, or tradition available anywhere on planet Earth. Ultimately, your personal magick relationship with the demonic gods will shape your ascent together. Of course, the unique type and intensity of your awakening will vary individually according to your personal ethic, genetic constitution, and religious indoctrination.

Here’s how the world’s top talismanic jeweler, The Talimancer, has formulated the Amulet of Belial to fuse together Planetary and Demonic energies…

In terms of size, the amulet stands at approximately 1.5 inches tall with a thickness of 4 mm, and includes a nylon cord necklace.

As clarified above, the amulet features a unique magick formula within the alloy composition to synergize the sorcery of dark planets and demons together, while simultaneously eliminating the very low risk of toxicity from traditional metal jewelry.

With the Consecration Kit of the Amulet, you’re going to receive immediate access to two carefully designed companion materials in the members area. The (1) video consecration course and (2) ebook consecration grimoire will “activate” your psyche to open your energy body as a Magick Gateway to receive the transmission of priceless Magick Gnosis from The Nine Demonic Gatekeepers to empower your eternal ascent in this life and future lives.

Together as a Consecration Kit, the Video Course and eBook Grimoire will transform you into a human lightning rod that receives clear transmission from The Nine Demonic Gatekeepers for the rest of your life and beyond in both the physical and astral planes.

When I embarked on my three-year pathworking, I entered perfect possession with every one of The Nine Demonic Gatekeepers, and they transmitted the gnosis necessary to arrange the sigil amulets one demon at a time. Only when I had finally entered perfect possession with the full nine, did I finally possess the complete ritual protocols necessary for harnessing the magick of The Nine Demonic Gatekeepers in unison as a collective cosmic force, called The God Star and The Black Diamond.

I genuinely believe that as many human magicians as possible need to harness the unlimited magick synergy of The Demonic Gatekeepers to accelerate the speed of human evolution. Therefore, when you place your order for The Amulet of Belial with Consecration Kit, you’re going to receive the Amulet, the Consecration Kit, and get $50 of to save 14%.

Of course, you can also place an order for The Amulet of Belial by itself at only $249. Beware that a strictly limited edition of only 40 amulets exist in this design, therefore I sincerely urge you to take advantage of these stunningly gorgeous, silver-plated, lunar-powered, demonic sigil amulets right now, because the world’s top talismanic jeweler, The Talimancer, handcrafted every single one uniquely and personally.

As you embark on your life-changing journey with the demonic gods and goddesses into the Infernal Empire, I welcome you to refer to my 459-page master-grimoire, The Nine Demonic Gatekeepers, to receive the full, uncensored records of my demonic gnosis as an essential, indispensable, Luciferian light upon your path.