BELIAL: WITHOUT A MASTER – VOLUME ONE
Earth’s Most Complete Guide To Magick Of Belial…
Humanity’s Official Contact With The First
Demonic Gatekeeper From The Outer Darkness 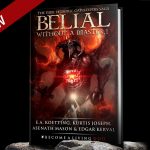 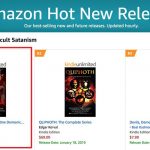 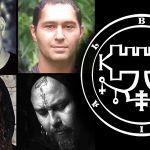 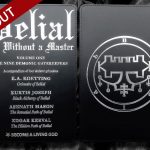 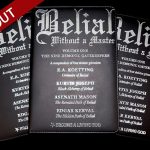 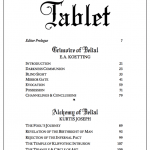 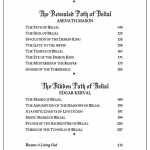 NEW: Second Edition in graphic hardback. First edition in leather has sold out.

Availability
Now available in a graphic hardback second edition. First edition in leather has sold out.

BELIAL: Without A Master, Compendium 1
Add to Cart 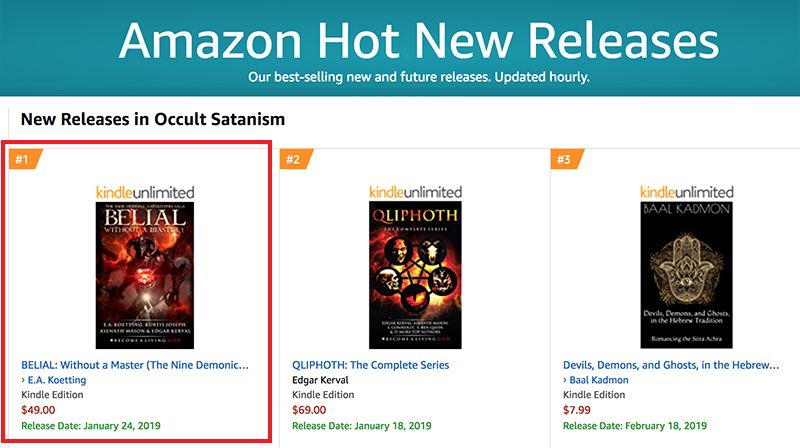 The last four months have utterly obliterated me. I embarked on literally the most insane pathworking of my life with Belial only — a full-on, no-holds-barred dedication of my time and magick to the First Demonic Gatekeeper.

Our psychic union became so immersive that I could no longer separate myself and him. When it became time to culminate our pact in an ultimate possession ritual, I did not need to because he completely animated my psychology and body already.

Every time I entered the Rapture, I could feel him kick in and take over my brain at which point his astral world enveloped my field of view and my vocal cords channelled his voice in deep-throated ramblings like a second personality had come alive.

A full length, black, scrying mirror hangs on a wall in my temple like a giant inter-dimensional gateway — you might have seen it in my videos. Belial brought this astral portal to life with vibrant, open-eyed, human-sized phantoms like no other spirit ever has. In fact, he revealed his five top familiars with related sigils, which I have recorded for you in my grimoire.

Demonic possession refers to a ritual where a sorcerer suspends personal will so that a demon can substitute their will and animate the psychology and motor functions of the sorcerer. A blackout can occur where the sorcerer loses wakeful awareness as the demon takes over the brain. It compares to being temporarily put to sleep under anesthesia in a hospital.

I have undergone possession with both the hottest, wildest species of spirit — the Voodoo Loa — and also the coolest, most healing species of spirit — the Norse gods & goddesses. Through these past experiences, I knew with certainty that my awareness would blackout in the middle of a Belial possession. As a precaution to this, I positioned high-definition cameras and microphones in my temple and filmed my entire range of pathworking experiences with Belial over the three months. Then I gave my video footage to a freelance stenographer who typed my out-of-body revelations into transcriptions for me. I formulated the most enlightened and cryptic parts of these channellings into my book Grimoire of Belial.

As it turns out, three other lifelong black magickians named Kurtis Joseph, Asenath Mason, and Edgar Kerval have performed magick ritual with Belial over the years and formulated their knowledge and experiences into grimoires too… And as remarkable as it sounds, Belial channelled almost identical insights through them as he did to me, albeit with a twist for every individual.

We four sorcerers have combined our separate grimoires together into an unprecedented Compendium of Belial.

My Book One in this compendium measures at approximately 15,000 words. It contains 100% pure revelation received in both black mirror scrying and possession channelling; it involves no ponderous facts nor intellectual rumination on Belial.

Moreover, in certain instances my experiences might annoy or disturb traditionalists because they transcend and contradict the claims of past magicians like Aleister Crowley.

In the Second Edition of THE GOETIA, Crowley made the remark that the number of legions governed by Belial was 80, due to Perdurabo’s own magickal work with that demon. I can’t say exactly what is responsible for the increase, but as my Temple filled with unholy spirits, 80 Legions seemed to be quite the understatement…. — Darkness Communion, page 24

As a second example:

Do what thou wilt is no longer the law. There is no law. — Belial, Channellings & Conclusions, p.86

The science of magick is never settled. If you view magick as an emerging field, then you will love this compendium because it provides four alternate perspectives that innovate from conclusions of previous sorcerers.

When Belial and I convened at the Crossroads in my black mirror, I tried to remain on the topic of the Nine Demonic Gatekeepers, the Outer Darkness, the Cosmic Awakening, the Ancient Covenant as he called it, and even a possible alien extraterrestrial connection. At times Belial enlightened me, for example when he shared his top Five Familiars; but other times he mocked me with riddles and then belly laughed at my confusion.

Belial disappeared from beneath the surface of the mirror, and his familiars appeared … to my scrying eyes as clearly as Belial had, their deeds and powers spoken by Belial’s now incorporeal voice … as they appeared in the mirror before me, their sigils also took shape in my grimoire, like lines of energy only slightly brighter than the paper pages, but shimmering as things from other worlds will. — Mirror Gate, p.51

If a random stranger stumbled across my grimoire, they would mistake it for a diary full of apocalyptic, schizophrenic ramblings interspersed with creepy geometric illustrations. But in truth, it records a litany of priceless channelled insights into an Ancient Covenant forged between the Demonic Gatekeepers and the human race millennia ago.

Book Two contains another 15,000 words. Therein, the former Christian seminary student Kurtis Joseph shares his lucid evocation experiences and revolutionary findings on Black Alchemy as only he can.

Alchemy refers to the medieval concept of turning a base metal into gold. Thus, Black Alchemy refers to when magick awakens the junk DNA of a sorcerer whereby it ignites their Godhood and reinstates their Human Birthright.

Kurtis lays out a diagram of the Temple of Kliffothic Intrusion along with the Seals, Demonic Names, and Triangle & Circle of Art necessary to summon Belial and other Demons to ignite Black Alchemy. Then he walks you through the Rituals of Kliffothic Alignment and Intrusion where you evoke the 10 Kliffothic Forces for gnosis. Lastly, he gifts a secret key called the Sounds of Silence that connect you with the Demonic King and his Legions.

You literally cannot find a grimoire like Black Alchemy of Belial by Kurtis Joseph anywhere else. The next generation of sorcerers will look at his material as groundbreaking in the area of Kabbalistic doctrine.

Book 3 and Book 4 form a synergy and measure at approximately 10,200 words altogether, but each grimoire also stands apart to reflect the individual gnosis of each sorcerer-author. Asenath Mason and Edgar Kerval entitled this duo: The Revealed & Hidden Paths of Belial.

In her perennially exquisite manner, Asenath gives an array of deep insights and meticulous facts behind the diabolistic history, etymology, and Kingdom of Belial in the Draconian context of Qliphothic Magic.

The Qliphoth of Daath is called Belial, or The Worthless One, and is guarded by the demon king … We are usually familiar with such guardians of the Abyss as Choronzon and Shugal, the female and the male aspects of the Beast 666 … But Belial is the gateway and the oracle that allows for interaction and communication with all spirits of the Nightside. — The Gate to the Abyss, p. 160

Both Asenath and Edgar furnish precise evidence for their conclusive stance that Belial keeps the Gate of the Left Hand Path, and thus for ultimate initiation the magician needs to make contact with him through sonic invocation, ritual evocation, and dream-time soul travel.

Due to their extensive personal experiences with Qliphothic Initiation, their Revealed & Hidden Paths of Belial act like a tour guide to the elaborate logistics and politics of the Kings & Queens, Worlds, Keys, and Gates that permit a magician to reach Gnosis of the Threshold in the Qliphothic Universe.

As a pair of clairvoyant visionaries, they both have illustrated an assortment of art just for this grimoire. It features: a new modernized Sigil of Belial, Sigils of his Six Inner Gates, a full landscape view of his sinister realm, and the Key to his temple. Their demonic artwork alone helps a sorcerer to travel further than they ever could have without it.

My full course entails uncensored, never-before-seen footage of live channelling under the Rapture of Belial. You will watch me perform scrying divination in my full length black mirror, demonic evocation, and classic possession on film.

I have called this course Apocalypse of Belial because the gatekeeper truly reveals himself personally in it for the first time ever. That is, he discloses insights into the Ancient Covenant, the Awakening, the Others, and the Seed of Darkness — perhaps the four greatest, most urgent revelations of our time.

In the Book of Revelation from Christianity, the apocalypse forebodes End Times, i.e., the end of the world. That premise remains pertinent in a contrarian sense in that Belial reveals the death of Christianity and last days of other politically-devised weapons of human enslavement.

The Earth’s Most Complete Guide To The Magick Of Belial… Order Compendium Of Belial Right Now And Receive:

It may sound grandiose, but I honestly consider this the most complete and innovative guide to the black magick of Belial that has ever existed, and certainly the most helpful that exists anywhere on earth today. The First Demonic Gatekeeper suite contains a fully comprehensive suite of grimoires and a companion course that provides every assistance that an aspiring sorcerer or witch in the twenty-first century could need.

I cannot comment on this too much because Belial did not — would not? — disclose too much. He utilized these terms exactly: The Others and planted/planets and Watery Spheres and Awakening. He declared thus:

The Others … planted/planets among the Watery Spheres … and you all are Awakening.

He said either planted or planets but I could not decipher which.

My intuition has told me for a long time that this ambitious cosmic Awakening or Liberation of the Nine Demonic Gatekeepers also extends to other sapient species of life on other planets and not just humans on Earth — it might include so-called aliens or extraterrestrials elsewhere who awaken also.

Instead of hearing my speculation, why not find out for yourself? This four-grimoire compendium and two-course pathworking furnishes literally every rite, spirit sigil, and gate seal necessary to deeply connect with Belial by yourself.

Let us know your findings… 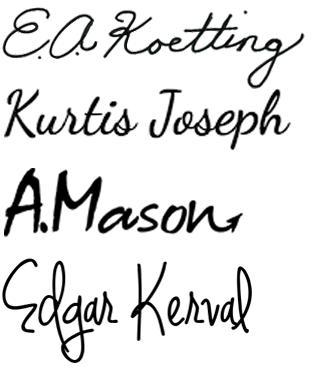 P.S. A Reply To Belligerent Christians Who Stalk And Harass Us…

I know the Demonic Gatekeepers horrify you. I know Belial horrifies you. You literally believe that we have opened a Seal of the Apocalypse. You believe End Times have come and that you witness Last Days.

You stalk Satanists on Facebook. You pollute their Youtube channels with insane comments. You send rude belligerent solicitations to their inbox.

Let this remain my reply forever: You are one hundred percent right.

Your Last Days have come.