If The Devil Penned A Deathbed Confessional To Disclose The Philosophy Behind His Evil, What Would He Say? I Underwent Diabolical Possession For Six Months To Find Out His Answer 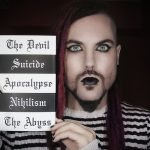 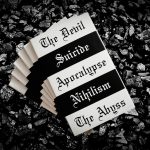 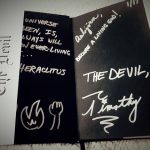 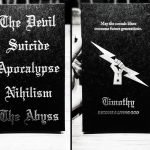 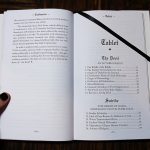 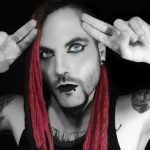 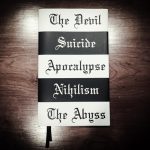 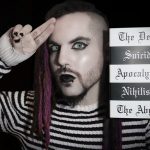 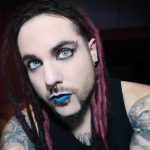 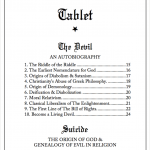 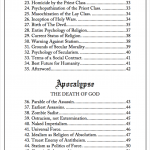 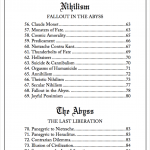 In The Devil: Suicide, Apocalypse & The Abyss, you’ll learn:

Payment
Use a valid debit or credit card. You may also use Paypal at checkout.

Shipping Speed
Global delivery in 2 weeks on average. You will receive the tracking number by email.

The Devil: Suicide, Apocalypse & The Abyss
Add to Cart

It might surprise you that the greatest philosophers in history felt these same awkward, misanthropic feelings too! You read that right: many of these enlightened figures confessed in their personal diaries how they felt chronic loneliness and depression, even suicidal tendencies. But why?!

“The barrel of a revolver is for me a source of relatively pleasant thoughts.”
— Friedrich Nietzsche, Selected Letters

I refer to this experience as fallout… when a critical thinker identifies the deception of reality and divorces from the society of fools whom deify it… when a person questions their own existence and admits that they have no final answer to the mystery but only a trash can full of popular lies.

“My whole life has crumbled under my gaze: this whole eerie, deliberately secluded secret life… all my human relationships have to do with a mask of me and I must perpetually live a completely hidden life.”
—Friedrich Nietzsche, Selected Letters

The Luciferic Rebellion, the War in Heaven, the Fall From Grace, the Temptation in the Desert, Revelation, the Final Judgement, Eternal Damnation… everybody on earth knows these archetypal mythos of the Christian saga.

In this context, who could experience more existential angst, more fallout, than The Devil himself? Would not The Devil possess the loneliest, most forlorn, most arrogant personality ever?

Does Not The Devil Deserve To Be Heard In Full At Least Once? As A Matter Of Fairness, Should We Not Listen To His Side Too?

In truth, it hurt badly to write this book and to live full-time in the psychology of The Devil for months. Have you ever heard the term method actor? It refers to an actor or actress who stays in character for the movie full-time. I essentially did this. To coin a phrase: I became a method author. I remained in the persona of The Devil – I let him possess my psyche – and disclosed my most honest and authentic feelings through the terminology and concepts of Western Philosophy.

Certain days, I would close my laptop and feel an infinite distance from humanity. Waves of depression would consume me. I felt forsaken and thus vengeful. I truly identified with the personality of The Devil and at night it felt like I slept in the fucking abyss.

However, the pendulum would unexpectedly swing back to moods of exuberance and overflowing joy and an overabundance of strength like a revolutionary.

As a whole, this book has liberated my personality and hardened my perspective, so it was certainly worth it, but I would rather not relive that exact experience again. It felt way too unhinged.

The British Empire and its monarch King George III certainly judged the American Revolution and its Founding Fathers as nothing but Devils, Satans, traitors, and adversaries. Nobody questions the moral righteousness of the American Revolution, but everyone hypocritically questions the moral righteousness of the Luciferic Revolution, when in essence both revolts expound the exact same values!

If The Devil wrote a manifesto, a memoir, a deathbed confessional of his most honest thoughts—what would he say? How would he critique Western Civilization? What could he tell us about god? About ourselves?

For the last fifteen years I did nothing but study the classics of Western philosophy—everyone from belligerent radicals like Heraclitus and Friedrich Nietzsche to traditional geniuses like Aristotle and Immanuel Kant.

I have identified an irreconcilable schism in the way these intellectual giants thought, a two thousand-year-old ontological war that could ultimately be classified as pluralism versus monism or perspectivism versus absolutism. Every philosopher tends to fall into either one of the two camps, which then affects their positions on topics like truth, morality, and beauty.

We can summarize this timeless dialectic in religious terms: The Devil versus God.

The “good” god almost always prevails in religious mythology, because the priests architect the doctrine for their political advantage. But whose ideas prevail when subjected to rational, sensible scrutiny according to contemporary values?

What Does Not Kill Him Makes Him Stronger… Thus The Devil Has Become The Strongest Being In Human History!

From life’s school of war: what doesn’t kill me makes me stronger.
—Friedrich Nietzsche, Twilight of the Idols

The Devil personifies the most hated being in the history of humanity; he has borne the very hatred of god himself and still lives on in the heart of humanity.

God is dead! God remains dead! And we have killed him! How shall we console ourselves, the most murderous of all murders? …Shall we not ourselves have to become Gods?
—Nietzsche, The Gay Science

If god is dead and The Devil lives… does that not rank The Devil above god in strength?

This Diary Of The Devil Would Have Been Censored, Confiscated And Burned Two Hundred Years Ago… Hell, They Could Still Censor It Today

This book exists beyond good and evil. It demolishes sacred spaces and safe spaces.

Too many great books have been prohibited and destroyed because they possessed dangerous ideas that threatened the institutions of society. Well, those outlawed ideas pale in comparison to what I placed in this book. Under protection of free speech law in the United States, I can safely share them.

However, do not mistake this for a traditional political manifesto, a tawdry laundry list of immediate demands for the Church and State. As I said, I have studied the rubrics, missives, and diaries of the most fiery revolutionaries, be they philosophical, religious or otherwise. I know each side of every main dialectical topic.

And it begs the question… where would The Devil stand and why?

In this book, The Devil tugs on the thread of humanity and unravels the sweater of religious thought. In other words, The Devil and his Rebel Army of Demons take the power back from god and liberate us to Ascend.

Or would it be Descend?

Fatalistic, Misanthropic, And Rude… My Diabolical Style Will Creep Out Vanilla People

As explained, the psychology behind the philosophy matters, i.e., the person behind the ideas matters. Personally, I possess a very cutting and arrogant personality in real life. I unnerve people when they meet me. To this point, not only will the pessimistic, misanthropic, fatalistic, and rude attitude of this book mortify innocent, vanilla people—but the diabolical look and feel of the text itself will creep them out.

I breathe life into The Devil archetype. This book radiates like Uranium and might as well glow in the dark. If you read it openly in a cafe, it will turn heads and raise eyebrows.

If it affects you, let me know.

We all have become accustomed to seeing extremely gorgeous books in the field of magick. The creation of the book itself possesses magick. As a bona fide book worm myself, I geek out over exact details.

I care dearly about the design of this book, because I want it to look and feel devilish. Inspect the details below:

If I do say so myself, it looks dope as hell!