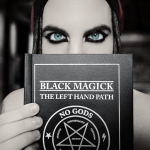 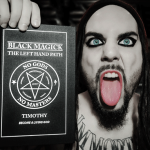 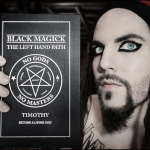 Payment
Use a valid debit or credit card. You may also use Paypal. To do so, click the Order Now button and select Paypal at checkout.

MY TOUR DE FORCE, Black Magick, incites a Copernican Revolution in magick. I prophesy that sorcerers in the future will view it in retrospect as a crucial watershed event in the history of supernatural theory.

I truly consider this treatise an unprecedented milestone of the Left Hand Path, because it illuminates the full ideology in secular terminology, and grounds it in the enlightened ideas of revolutionary Western Philosophy for the first time ever—rather than the obsolete myths of Abrahamic desert religion. For example, rather than a Tree of Life in Qabbalah, you will discover the Will to Power of Friedrich Nietzsche; instead of monotheistic gnosticism, you will become familiar with the egoism and adversarialism of Max Stirner; instead of karma and threefold rules, you will become acquainted with the secular ethics of Immanuel Kant. In other words, I utterly demolish the irrational and fallacious beliefs of white magick, and advance you into the sublime genius of black magick via concrete Western philosophy.

This 413-page dissertation furnishes logical conclusions to all the notorious inquiries that have perennially confused magicians:

The Left Hand Path Is More Than Magick… It Exists As A Way Of Life!

What magicians casually refer to as black magick, exists as a way of life by which many souls devote themselves conscientiously. The Left Hand Path is composed of a coherent weltanschauung, or worldview. It merits meticulous study and critique as both a magickal and philosophical school of thought. However, very few intellectuals have given it the scrutiny it requires, and those that did have always hidden it behind the esoteric initiations of obscure occult priesthoods.

In this sense, my text Black Magick attains two milestones: (1) it expounds the path in philosophical terms, not religious; (2) it does so in an exoteric manner, and requires no initiation whatsoever—in fact, it rebels against the outmoded tradition of elitist, esoteric occultism altogether. It champions open, egalitarian enlightenment for every individual.

Welcome to the Age of Enlightenment in black magick.