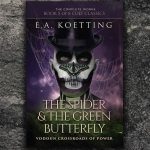 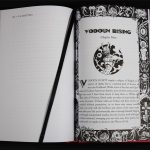 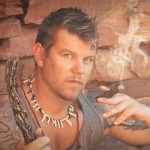 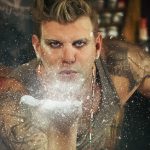 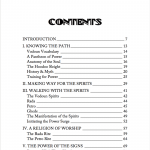 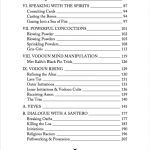 In The Complete Haitian Voodoo, you will learn:

Availability
Third edition in graphic hardback available on a first come basis. Note that the second edition in leather and cloth have sold out.

Special Savings
Save 25% off with The Supreme Vodoun Magick pack.

Policy
There are no refunds on ritual for hire nor physical goods in limited edition. Video programs come with a 7-day trial period.

The Spider & The Green Butterfly
Add to Cart

If you answered YES, then I sympathize because I felt the exact same way when I first discovered Vodoun—the Haitian name for Voodoo. I could feel in my heart the need to learn this Path of Magick, but the absurd hurdles and hassles in order to undergo initiation seemed impossible to fulfill.

Before now, to receive formal initiation into Vodoun, a magician needed to either become a glorified slave in Haiti for two decades, or just bribe the Houngan with $30,000 to skip the bullshit. In other words, it became a racket.

Guess what? The Spirits of Vodoun—called the Loa—could not care less about those manmade demands. In fact, I personally discovered through my own possession experiences that you can invoke The Spirits on your own without a priest.

That’s right. The human priests are just a “third wheel” in the relationship.

About 8 years ago a Vodouist discovered my grimoires of black magick. He reached out to counsel me in Vodoun Magick.

One day he told me simply to “Find Legba” then hung up the telephone abruptly.

I strapped on my backpack and hiked into the sweltering heat of the desert—alone and off the grid of civilization—day in and day out for months.

Rite after rite after rite, the Loa possessed me more and more forcefully until eventually they would take over my will. I would black out as they animated my body then wake up face down in the sand hours later with blistering sunburn.

I found Legba all by myself, which means I underwent the REALEST Initiation.

The Vodouist authenticated my experiences and the Houngans in Haiti insisted that I compile my magick into a Western-style grimoire. Tragically, they demanded that we insert blinds into critical parts of the text in order to deceive unsuspecting magicians—a sad, unethical fact that I have always hated badly, because it contradicts the premise of the grimoire in the first place. Moreover, they threatened to murder me if I ever confessed this. Like a fool, I obeyed and pledged a vow of secrecy under their duress.

For these reasons, I feel 100% justified in my right to break the oath and do as I please with my magick.

Save 18 Years And $30,000 With The First Complete Grimoire & Live Demonstration Of The Most Powerful Rituals, Initiations, Spells, Curses, Altars, Talismans, Powders, And More

1. The Spider & The Green Butterfly

I revised, updated, and corrected this sold out grimoire into a third edition in graphic hardback. The great Polish sorceress Asenath Mason illustrated the Veves and Uruguayan artist Adrián Fuentes illustrated the Loa in their human embodiments. No truly uncensored Voodoo grimoire penned by a real sorcerer has ever existed before this one.

Believe it or not, I rank this live ritual pathworking on film as more important than the book! It shows step-by-step how to perform every critical rite and spell in painstaking detail. It gives you full immersion into the Voodoo Current over 8 hours.

The priesthood threatens to murder anyone who could potentially reveal the secrets behind their religion. It explains how they have remained clandestine for so long. As I said, they claimed they would kill me. This terrorism is not new or unique to them though—all hyper-tribalistic religions do this.

Am I the only man on Earth who possesses the courage to innovate this Magick Current? If so, then I will do it by myself.

Oh my god! What if the priesthood attacks me?

Oh my god! What if the priesthood hates me?

A houngan called me a white devil once. I considered it the highest honor as I have been in league with the devil and demons my entire life. For him to identify a freedom fighter like me as his worst enemy only further justifies our mission to liberate this knowledge.

The Loa will tell you that they manifested into existence for two reasons:

Originally, when they forged a relationship with humanity, they had aspired to transmit an enlightened message of personal freedom and power. However, primitive men and women formed a religion around them, an elitist political priesthood took over the tribe, and it has held a monopoly on the magick ever since.

I abolish that tradition right now. We give the power back to both the Loa and the People so they can ascend together again.

Perhaps occultism helped carry knowledge forward hundreds of years ago, but that outdated tradition only interferes with the open circulation of knowledge today. The same secrecy they once used to preserve the Loa, now does the worst harm to the Loa. Religious hierarchy has become regressive.

Then I happily give to you The Spider & The Green Butterfly grimoire AND the Haitian Voodoo Mastery video program. Join me…

In freedom and power,