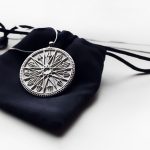 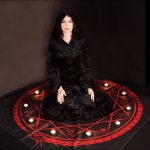 With the Qliphothic Star Amulet, you can:

Availability
This limited edition amulet is available on a first come basis.

Special Savings
Save 20% off with the Qliphothic Star Amulet & Magic Circle together.

Today I’d like to present the Qliphothic Star Amulet, which is available together with my book Qliphothic Meditations and pairs with my Qliphothic Magic Circle. Unique in its design, the amulet will make an excellent ritual tool for those who wish to empower their work with the forces of the Dark Tree. Beautifully crafted in polished silver, the metal with many magical and mystical associations, it can be used as a focal point for any ritual provided in this grimoire, as well as in many other rites of Qliphothic sorcery. Empowered and consecrated through the work of the book, it will serve as a permanent key to the currents of Sitra Ahra.

The symbolism used in the amulet is simple and embraces the classic Star of the Qliphoth combined with eleven tridents, the keys to the current that is worked with in the book. Eleven is a number associated with the Qliphoth and the Dark Tree in many ways. Traditionally, the eleven points or rays are symbolic of the eleven realms on the Dark Tree. These realms are as follows: Lilith, Gamaliel, Samael, A’arab Zaraq, Thagirion, Golachab, Gha’agsheblah, Satariel, Ghagiel, and Thaumiel. In this paradigm, Thaumiel is viewed as split into two and consisting of two separate realms, hence the number eleven, although in depictions of the Dark Tree there are usually ten Qliphoth. In my own writings, however, I use the Qliphothic Star as representative of the ten Qliphothic realms with the hidden Sephira Daath/the Abyss which I personally view as an integral part of both sides of the Qabalistic Tree, connecting them and functioning as a gateway from one to the other.

In the amulet, the Star of the Qliphoth is inscribed within the circle. This stands for continuity on the path and the cyclic nature of the current, referring at the same time to Leviathan, the Serpent of Chaos, which is also featured in my Qliphothic Circle that is available with the book as well. The background on which the star is displayed is symbolic of the Void, the infinite chaos, which in Qliphothic sorcery serves as the canvas for all creation and all manifestation.

Finally, the last symbol used in the amulet is the trident. In ancient times the trident was an emblem of power and authority, attributed to such gods as Poseidon, Neptune, Shiva, and many others. In my own work and in the ritual system presented in Qliphothic Meditations the trident is symbolic of Lucifer and represents both the key to the current and the body of the Initiate. It stands for the pillar of ascent, forming the axis of the world, and represents the Initiate on Lucifer’s path of flames which begins in the Cave of Lilith (the first initiatory realm on the path of the Nightside) and is completed within the Throne of Lucifer in Thaumiel. In the magic of the Qliphoth, Lucifer himself frequently appears with a trident in his hand or in a posture resembling the shape of a trident, and it is also the symbol with which he marks his Initiates. In this interpretation, the trident can be viewed as a key to the Dark Tree and at the same time it opens inner gateways within the Initiate’s mind, allowing access to the current on the subconscious level.

How To Wield The Power Of The Star Amulet

If you wish to use the amulet as a key to the Dark Tree in your ritual work, you can hold it in your hand and meditate on it while chanting the name of the chosen Qlipha, or all of them, to attune your mind to their energies. Envision the star and the tridents swirling and morphing into a black vortex through which you can travel with your mind or in your astral body, or simply focus on the energies flowing through the star into the temple and back, into the Nightside.

I personally recommend using the amulet together with the book and the ritual circle. This way the circle becomes a gateway to the Qliphoth, while the amulet serves as the key – both to the whole Dark Tree and to the particular realms. But this is only one of many ways to use the amulet in your practice.

There are many ways to work with the amulet. I’m also sure that if you’re creative in your work, you’ll find your own methods to incorporate the Qliphothic Star into your practice.

The crafting of the amulet took a long time, and we’ve been working for months to find the material and design that would make a perfect key to the currents of the Dark Tree. Several prototypes of the amulet included bronze, steel, and silver, before we eventually felt satisfied with the design that is now offered to you as part of a very small batch. The design itself has been changed and perfected many times to make it simple and easy to work with, and at the same time powerful and impressive in its simplicity.

The Qliphothic Star Amulet and Qliphothic Magic Circle form a synergy and amplify each other’s power, so I invite you to try them together.

Once this precious amulet becomes known, a number of counterfeiters will plagiarize my design, manufacture fake imitations with inferior material, and try to pass it off as authentically created by me. Do not be fooled by their scam. I honestly consider fraudulent knockoffs to be extremely dangerous due to the demonic nature of the Qliphothic deities. If you would like to harness the energetic powers of Qliphothic magic, then only order the Qliphothic Star Amulet right here.