Belial: Without A Master, Gatekeeper 1
Complete Uncensored Footage Of My Ritual Gnosis And Live Possession Channellings With Belial… Humanity’s Official Contact With The Demonic King 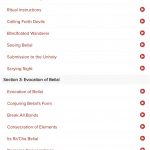 Belial: Without A Master, Gatekeeper 1

The last four months have utterly obliterated me. I embarked on literally the most insane pathworking of my life with Belial only — a full-on, no-holds-barred dedication of my time and magick to the First Demonic Gatekeeper.

Our psychic union became so immersive that I could no longer separate myself and him. When it became time to culminate our pact in an ultimate possession ritual, I did not need to because he completely animated my psychology and body already.

Every time I entered the Rapture, I could feel him kick in and take over my brain at which point his astral world enveloped my field of view and my vocal cords channelled his voice in deep-throated ramblings like a second personality had come alive.

A full length, black, scrying mirror hangs on a wall in my temple like a giant inter-dimensional gateway — you might have seen it in my videos. Belial brought this astral portal to life with vibrant, open-eyed, human-sized phantoms like no other spirit ever has. In fact, he revealed his five top familiars with related sigils, which I have recorded for you in my grimoire.

Demonic possession refers to a ritual where a sorcerer suspends personal will so that a demon can substitute their will and animate the psychology and motor functions of the sorcerer. A blackout can occur where the sorcerer loses wakeful awareness as the demon takes over the brain. It compares to being temporarily put to sleep under anesthesia in a hospital.

I have undergone possession with both the hottest, wildest species of spirit — the Voodoo Loa — and also the coolest, most healing species of spirit — the Norse gods & goddesses. Through these past experiences, I knew with certainty that my awareness would blackout in the middle of a Belial possession. As a precaution to this, I positioned high-definition cameras and microphones in my temple and filmed my entire range of pathworking experiences with Belial over the three months. Then I gave my video footage to a freelance stenographer who typed my out-of-body revelations into transcriptions for me. I formulated the most enlightened and cryptic parts of these channellings into my book Grimoire of Belial and course Pathworking of Belial.

My full course entails uncensored, never-before-seen footage of live channelling under the Rapture of Belial. You will watch me perform scrying divination in my full length black mirror, demonic evocation, and classic possession on film.

I have called this course Apocalypse of Belial because the gatekeeper truly reveals himself personally in it for the first time ever. That is, he discloses insights into the Ancient Covenant, the Awakening, the Others, and the Seed of Darkness — perhaps the four greatest, most urgent revelations of our time.

In the Book of Revelation from Christianity, the apocalypse forebodes End Times, i.e., the end of the world. That premise remains pertinent in a contrarian sense in that Belial reveals the death of Christianity and last days of other politically-devised weapons of human enslavement.

The Earth’s Most Complete Guide To The Magick Of Belial… Order The First Demonic Gatekeeper Right Now And Receive:

It may sound grandiose, but I honestly consider this the most complete and innovative guide to the black magick of Belial that has ever existed, and certainly the most helpful that exists anywhere on earth today. The First Demonic Gatekeeper suite contains a fully comprehensive suite of grimoires and a companion course that provides every assistance that an aspiring sorcerer or witch in the twenty-first century could need.

I cannot comment on this too much because Belial did not — would not? — disclose too much. He utilized these terms exactly: The Others and planted/planets and Watery Spheres and Awakening. He declared thus:

The Others … planted/planets among the Watery Spheres … and you all are Awakening.

He said either planted or planets but I could not decipher which.

My intuition has told me for a long time that this ambitious cosmic Awakening or Liberation of the Nine Demonic Gatekeepers also extends to other sapient species of life on other planets and not just humans on Earth — it might include so-called aliens or extraterrestrials elsewhere who awaken also.

Instead of hearing my speculation, why not find out for yourself? This four-grimoire compendium and two-course pathworking furnishes literally every rite, spirit sigil, and gate seal necessary to deeply connect with Belial by yourself.

Let us know your findings…