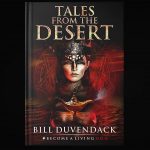 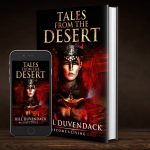 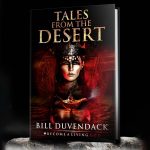 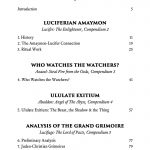 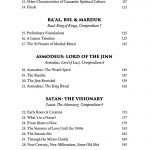 In Tales From The Desert, you’ll learn…

Tales From The Desert: The Eight Most Infamous Desert Demons
Add to Cart

Unearth the secret origins and magick powers of the most infamous demons in the occult with world leading demonologist, Bill Duvendack. Unlock the REAL spiritual truth about Lucifer, Amaymon, Azazel, Abaddon, Lucifuge, Beelzebub, Baal, Asmodeus, and Satan with eight mini-grimoires in 201 pages.

I break down and look at the connection between Lucifer and Amaymon, who have merged into their own being. I share a ritual that a lot of people miss, because it not only makes contact, it is my Goetic template based on traditional methods, but updated to include more modern thoughts. As they say, “Tradition is just peer pressure from dead people.” In the ritual, you get two valuable results: A contact ritual to use, but also a look at how I do Goetic work.

I focus on Azazel in context of the Watchers, because I get many questions about them. I look at the Watchers as a pantheon, and share two rituals. The first is a ritual of initiation to begin to explore their mysteries; the second is a communion with Azazel ritual.

I look at one of my favorite archetypes: the Dweller on the Threshold. I love working with this particular being because it has almost always been draped in shadows, ignored, or misunderstood, so when this opportunity came up, I jumped at it! More than this though, I included the concept of the Beast from the works of Aleister Crowley, as well as more Lovecraftian themes.

I share thoughts on the grimoire tradition as a whole, and in particular The Grand Grimoire through a critical eye. I introduce the word ADONAI, discuss it, and even show an example of its usage. A lot of people may take issue with me writing about the term ADONAI in a Left Hand Path book, but I encourage you to see how it aligns with the Left Hand Path, as the nature of this material is more scholarly and critical.

If you are an old school punk from the 70s and 80s, you will enjoy the reference to Beelzebubba. I have had many encounters with Beelzebub, and this piece shares what I know of him, and clarifies his connection with Lucifer. Specifically, I focus on his desert roots, and discuss the often neglected Canaanite religion, since most common and popular Left Hand Path beings come from there.

I have written about the fact that frequently encountered beings today were originally just titles at the time of their origin. This is true of Lucifer (light bearer), and this is true of Ba’al (lord). Thus, a lot of this essay is about the evolution of the name, but with special emphasis put on the connection with Bel and Marduk. Finally, in a complex twist, the ritual I share here is one that is dedicated to the 50 names of Marduk.

I write about Asmodeus as the King of the Jinn. How you can not be a student of occultism and not want to learn about them? The ritual in here is one that could be adapted over to Fae work, too, as you’ll see when you get to it.

Finally, Satan was the first Left Hand Path deity I encountered when raised Catholic. Contained in this piece is a look at Satan and Satanism over the last 60 years from the view of popular culture. Older people will remember more specifics, and younger people are getting an eyewitness account to truly Satanic times that have helped to evolve the Western Esoteric Tradition.

I welcome you to unearth the hidden tales of the eight, most infamous, desert demons in occult history…

See you in the grimoire,